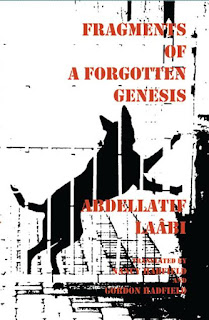 Abdellatif Laâbi was born in 1942 in Fes, Morocco. He is Morrocco's foremost contemporary poet. In 1966 he founded Anfas/Souffles, an important literary review, which provided a focus for Moroccan creative energies. It was banned in 1972. Abdellatif Laâbi was imprisoned, tortured and sentenced to ten years in prison for "crimes of opinion" (for his political beliefs and his writings) and served a sentence from 1972-1980. He was then forced into exile in France, where he has lived since 1985.

This single long poem was originally published in 1998 by Editions Paroles d’Aube. Fragments d’une genèse oubliée / Fragments of a Forgotten Genesis is a surrealistic refiguring of Genesis presented in twenty-six “fragments.” As a whole, the work is a mystical yet cynical re-visioning of both the Old Testament and the Koran.