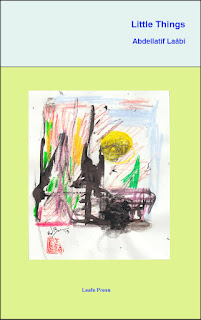 Abdellatif Laâbi was born in 1942 in Fes, Morocco. He is Morrocco's foremost contemporary poet. In 1966 he founded Anfas/Souffles, an important literary review, which provided a focus for Moroccan creative energies. It was banned in 1972. Abdellatif Laâbi was imprisoned, tortured and sentenced to ten years in prison for "crimes of opinion" (for his political beliefs and his writings) and served a sentence from 1972-1980. He was then forced into exile in France, where he has lived since 1985.

Published in English for the first time, “Little Things” (Les Petites Choses) was the fourth section of Laâbi’s collection “Le Soleil se Meurt” published in 1992. “Little Things” employs an epigrammatic and gnomic tone, and its references to Sufism imply that it is both a homage to and a parody of that aspect of Islamic thought, with its elements of mysticism, tolerance and compassion. But there is also a modernist and existential aspect to “Little Things”, and the tension between this and the Islamic elements is one of the strengths of the sequence.